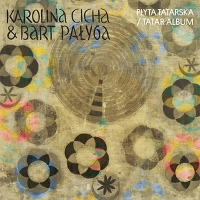 A musical journey through the steppes, culture and history.

“The polyglot vocalist reawakens the Tatar warriors.
Karolina Cicha is one of Poland’s most accomplished and interesting vocalist, not least for the choice of muic she performs. Her NINE LANGUAGES album (2013), with the brilliant multi-instrumentalist Bart Pałyga, was performed in the nine languages found in her native Podlasie region of north-east Poland. Two of thise were Tatar songs, and here she has recorded a whole album of them, with Bart Pałyga throat singing and playing steppe-derived instruments and percussion.

The tatars first came as invaders in the 14th century, but some were encouraged to settle as they were superb warriors, and there’s Muslim Tatar population there to this day and two historic wooden mosques close to the Lithuanian bordeor east of Białystok. Nothing remains in Poland of the language and music, however, so Cicha has had to source songs from the Volga and Crimean Tatars, while the album ends with a new song in Polish telling their story.
The music is full of horse rythms, overtones and memories of steppe. It’s a significant step towards resurrecting a forgotten culture.”

‘My private Tatar trail in the Podlaskie Voivodship starts in the village of Tatary near the town of Tykocin, where my great grandmother came from. The village was Christianised several centuries ago, therefore a Tatar memory is not present there anymore, but they say there are still old Tatar graves in the ground. Then, using local roads, I would go to Sokółka to visit The Tatar Department at the local museum. After that I would head towards Tatar villages: Bohoniki and Kruszyniany with their wooden mosques and Tatar mizars (cemetery). On the way I would also visit old forgotten villages such as Malawicze Górne or Drahle, that were bestowed to Tatars by the King John III Sobieski as a soldier’s pay in 1679. The trail would end in my hometown of Białystok, where I would visit the Tatar collection at the Podlaskie Museum at Warszawska Street. Białystok is currently a centre of Tatar culture, there are several Tatar cultural organisations here: The Tatar Children and Youth Group “Buńczuk”, The Tatar Dance and Music Group ‘Buńczuk’ and The Polish Society of Horseback Archery. Białystok is also a seat of the Muslim Religious Union of Poland and the Muslim Culture Centre. There is an active Tatar community here, especially members of The Tatar Union of the Republic of Poland. Every year they organise several Tatar events, among which the Festival of Tatar Culture is worth seeing for sure.’ – Karolina Cicha

Recorded by Andrzej Kijanowski in a wooden house in the village of Czarna Buchta in the Podlasie region in November 2016.
Analog equipment provided by Andrzej Giegiel and Karol Dobrowolski „Agrorecording”.
Extra recordings of guest musicians by „Dobra 12” Studio in Białystok.
Miks & mastering: Mariusz Dziurawiec i Jarosław Smak – Studio AS One