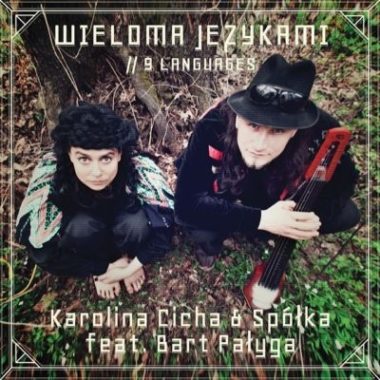 It draws from the richness and diversity of Cicha’s home region –
Podlaskie, located in the very northeast of Poland, which is one of
the most culturally and ethnically diverse areas in the whole Poland
– the borderland between the East an the West. The region is
inhabited by Polish, Belarusians, Lithuanians, Ukrainians, Russians,
Tatars and Roma people. Before the war there was a big Jewish
community living here – the Jews constituted a big proportion of
local society. Many religions are practiced there, many languages
spoken. No wonder it was here that the idea of Esperanto language was
born – in this multicultural enwironment Ludwig Zamenhof was
brought up.

ANDREW CRONSHAW, FROOTS:
“The set by polyglot Polish singer, accordeonist and electronicist Karolina Cicha and multi-instrumental Bart Pałyga was for me a transcendent moment almong the many spot-on showcases at last yea’s WOMEX.”

‘9 Languages’ draws from traditional musical scales. However, it is not a compilation of archive material, but a coherent whole, speaking modern musical language, based on the original Cicha’s style, her charisma, individual expression, and musical experience she gained in The Centre For Theatre Practices “GARDZIENICE”. Cicha invited multiinstrumentalist Bart Palyga to arrange this material. Duet Cicha/Palyga uses more than 13 as well ethnic and electronic instruments and sings as well in archaic aliquote style as well as traditional and rock.